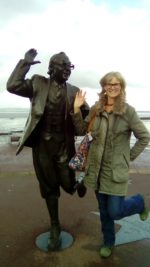 Sticks and Stones – by Rachel Sargeant

Mary slipped off the lead and watched Sadie give a gleeful shake of her ears and prance across the park. At least one of us is awake, she thought, yawning. What was I thinking of, coming out this early? She stifled another yawn, knowing that the other dog-walkers – the overweight jogger and his basset hound, the leather jacket lady and her whippet, and the elderly sisters with their Yorkshire terrier – would all still be in their beds. And so would she and Sadie if it hadn’t been for yesterday. She zipped up her coat against the cool dawn but couldn’t get rid of the chill the memory had given her.  She tapped her pocket to check its contents and walked on.

As she made her way towards the enclosed garden in the centre of the park, Sadie darted back and forth in the same general direction, her tail almost wagging her in half. When Mary reached the wire-mesh fence around the garden, she read the notice: “Welcome to The Dell. Regular patrols operate.”

“Not regular enough”, the leather jacket lady with the whippet had said to her only the other day. “When are they going to do something about that gang of louts? It’s an absolute disgrace.”

Mary had first come across the gang when she was out with Sadie.

“Got your poop-a-scoop, have you, Granny?” they’d shouted as they’d hung out of the Dell, swinging on the wooden gate, almost yanking it off its hinges. Granny, indeed, she’d chuckled to herself, admiring the sunspots on her hands. I’ve got plenty more dog walking years left in me yet. She’d given the lads a cheery wave but they’d laughed unpleasantly and one of them had spat out his chewing gum. He seemed to be the leader and, in his long shiny coat, reminded Mary of an executive fountain pen. “I doubt he can even write,” the lady with the whippet had said when Mary mentioned it to her.

When Mary fetched a well-gnawed tennis ball out of her pocket, a thin box fell out too. Sadie, a flurry of tongue and saliva, bounced towards it but Mary snatched it off the ground before the dog could pounce on it.

“You don’t want that stuff in your mouth, girl.”

Once out of sight, the box was forgotten and Sadie stood stock still, head set towards the ball. After a moment, she flicked her face towards Mary. Clever terrier eyes, a playful Labrador nose, fur that was all fluff one minute and all wire the next, Sadie was the pick-and-mix kind of dog that Mary adored. She tossed the ball across the grass and the dog threw herself after it.

“Come on, Sadie. This way.”  She stepped through a gap in the fence where a post had been smashed down. The whippet lady had pointed it out to her the previous week, condemning it as the yobs’ mindless vandalism. Mary thought the woman had it in for them ever since their leader had pointed at his coat and shouted, “Snap, missus. We’re twins.” The woman had been mortified to have her chic leather jacket compared with something a common lout would wear.

“Take no notice,” Mary had said at the time, suppressing a grin because she thought the boy’s coat looked the more stylish of the two. The thought now made her shoulders stiffen. She put her hand in her pocket and let her fingers find the tube inside the box. Industrial strength. She hoped one was going to be enough.

It was a different world in the Dell. She would have liked to linger, sniffing the scent of the roses, so delicate at this hour, but she had to keep on; there was no telling when the gang might arrive. She worked her way past the flowerbeds until she came to the wooden gate the louts had claimed as their own. Every day they’d be there, swinging over it or falling off it. Goodness knew what was in the cans they drank from and then lobbed into the rhododendron bushes. They’d climb up on the gate and shout obscenities at anyone who walked past, including the elderly sisters who’d had to put earmuffs on their Yorkshire terrier.

Mary took a closer look at the gate. It was in dire need of a coat of something. What a mess they’d made with their spray-can graffiti. She and the overweight jogger had caught them doing it once.

The yobbo in the coat had shouted, “I’m painting my tag so what are you wrinklies gonna do about it?”

“The only tag you need, my lad, is an electronic one round your ankle,” said the man in such a rage that even his basset hound gave a half-hearted growl.

“Just ignore them,” Mary had said. She’d said that a lot since the boys had arrived, and she’d expected to carry on saying it. But everything changed yesterday when they’d uttered a vulgarity too shocking to bear. She’d hurried home with her blood hammering in her ears and Sadie trotting beside her, tail drooping.

She put her hand in her pocket and shuddered at the vile memory. It was an absolute abomination. What could they have against Sadie? She could just about understand that not everyone liked dogs. Even she didn’t care to run the gauntlet of dog dirt that faced her on many pavements these days. But Sadie was a beautiful dog. As she took out the tube, a wave of icy indignation moved down her spine. It was time someone put an end to their reign of terror.

When Sadie heard the letterbox rattle, she scuttled to the porch, skidding on the vinyl floor, and snatched the rolled-up newspaper out of the flap with her mouth. She paused to adjust her grip and hurtled across the hall to the kitchen.

Her mistress took the newspaper from her and tickled her throat. Joy sped through Sadie’s body and she shook her hips from side to side, wagging her tail against the woman’s legs. When the woman sat down at the kitchen table, Sadie settled at her feet for a doze because she knew the woman wouldn’t move for a long time now she had the newspaper.

But she gave a start when the woman suddenly said, “It worked, Sadie. Listen to this: Although uninjured, the victim and his pals have vowed never to return to the Dell again. ‘I loved that coat,’ he told reporters.”

Sadie pricked up her ears, excitement surging from nose to tail. The woman had used her eager, time-for-a-walk voice.  “I’m a very tolerant woman but there comes a time…”

Sadie lifted her head and sniffed the newspaper. She wasn’t much of a reader but, if she had been, she’d have taken in the front-page headline: Youth Glued to Gate.

“He shouldn’t have called you the m-word.” The woman took a deep breath and forced out “Mongrel” in a whisper. She shuddered before adding, “Anyone can see you’re a purebred cross-mix.”