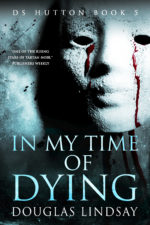 The Ringmaster by Douglas Lindsay

No one ever knew his real name. They called him the Ringmaster. And now he was dead, his body crushed and battered and broken in an attack that was bestial in its ferocity. His killer, in a final act of diabolical brutality, had slit open his stomach, sucked up his innards and then sprayed them around in a bloody fifty yard radius. The lungs, containing the last vestiges of air, bounced into a far corner. The heart rolled over beside them, leaving a trail of aortic slime in its wake. It was nasty, but it was the Glasgow way.

When the deed was done, years of humiliation having been avenged, his killer returned to her small caravan, where her clothes and all her possessions were neatly laid out on the bed, ready to go. And so it was that at 4:37 on a June morning that had already dawned warm and bright, Nelly the Elephant packed her trunk and said goodbye to the circus.