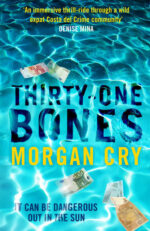 Research told me he wasn’t happy at all.

I could do something about that. Something that would require a sharp knife, physical restraint and a little private time, away from prying eyes.

Messy is the correct word.

The lecturer stands back from the lectern, dandruff clearly visible on his black velvet jacket. A snowstorm requiring an industrial plough. His smile – grey, crooked, one incisor missing – is one of misplaced satisfaction. The PowerPoint slide behind him displays a happy yellow face floating above text: with two typos. Four slides earlier there had been nine errors. He turns to the dwindling student body, expecting a round of applause. What he receives is the shuffling and mumbling that accompany bodies escaping. It’s Friday. The lecture was due to finish at four thirty. It’s now quarter past five. The weekend officially started fifteen minutes ago by any reasonable university standard of timing.

I drop my unused notepad into my bag. Most of the students in front of me are packing away MacBooks, Surfaces or, for the budget-conscious, laptops with the branding hidden by stickers that declare the love of a band, an author or political point of view. I stretch and stifle a sigh, no need to draw attention.

Closing my eyes, I wait for the theatre to empty. There’s a burning bridge that dictates my presence here and a desolate, one-bedroom ground-floor flat awaits. It’s warmer here than in the flat. The icebox I live in, a short-term rental, lies a forty-minute walk away, and the rain bouncing off the lecture theatre’s windows is annoying. Three-year-old canvas Vans, charity-shop sports jacket and ASDA jeans are no protection from a Glasgow winter. The only waterproof item I possess is the Co-op plastic bag my notepad sits in. It’ll make a good rain hat.

The lecturer tuts as people leave, expressing his displeasure at his effort’s silent reception. I close my eyes as he tidies up, bags stuff and messes around. I daydream. I have the time for such an indulgence. I conjure up a week in Spain. Five-star hotel. Spending money in every pocket. Restaurants, sun, booze and a late-night dance or two. The cost? Three grand. Exactly the going rate for offing the man beneath me. I’m mentally booking the flights when he shouts:

‘Excuse me. Are you staying all night?’

His voice has that nasal twang that Spike Milligan used so effectively to rip the pish, back in the fifties. A noise that requires face slapping.

I rub my unshaved chin. Time to get to work. ‘Simon, do you have five minutes?’

His name is Simon Oliphant and he has the dress sense of top-shelf Oxfam. He sports a goatee because he thinks it makes him look intellectual. It doesn’t. It serves to portray him as a dick. Soldering-wire thin, with a pot belly grown on Guinness and cheese-and-onion crisps, I doubt he’s been laid this century.

Not my fault, you boring bastard. You were the one who ran over.

‘Just a quick look-see on my next paper, Simon,’ I say as the last student leaves. Then I add, ‘I’m a little stuck.’

Stuck. A good word. I’d been stuck for a while on how to fulfil this contract. You have to understand that, in my line of work, it’s not the killing that’s difficult. There are many ways to despatch someone. The royal pain is getting away with it. That’s the real money shot. And there are some basic tenets that need to be adhered to. Learned behaviours that come with experience.

Let’s take my alpha rule, my guiding rule: the more complex you make the killing, the more likely you are to get caught. William of Ockham, while hiding from the authorities in a friary back in the fourteenth century, stumbled on lex parsimoniae – the law of parsimony. While contemplating life on the run he may or may not have written the words: ‘Entia non sunt multiplicanda praeter necessitatem.’

Roughly translated: ‘More things should not be used than are necessary.’

Take my last vic as an example.

Research told me he went for a walk every Sunday. Near a cliff.

A push. Gravity did the rest. No witnesses. I’d walked away. Through some woods. Climbed a tree. Out of sight. Hiding. Wrapped in a greasy parka. Leaving a scene too soon is the faux pas that catches out amateurs. A connection to be made. Timelines are killers. I’d waited for three hours. Descended. Walked three miles to my car. Saw no one. Home. Job done.

I can thank a retired pathologist speaking at my local library for the cliff-push idea. No chance of trace DNA. No evidence. Perfect.

Simon has proven a tougher gig.

Research told me he lives on the campus and spends all his time, and I mean all of it, in three places – the bar, his room or the lecture building – and has two weaknesses. I plan to use both.

I’d sneaked in at the back of the lecture theatre with twenty minutes to run. I wore a light disguise. Artificial tan, shaved head, flat cap, cheap clothes. All pointing to a skint student.

A skint student who is now asking for help with his studies.

Time to earn my crust.

I descend to the lecture floor.

I reach into my bag as I step onto the stage and pull out a clear plastic pouch, stuffed with white powder.

Research told me they would.

I prod the pack with my gloved finger. ‘Pure as Colombian snow. Uncut. Wholesome. And, as they are heard to say in the world’s upmarket toilets, this is very, very good Charlie.’

He glances at the door. And that means I have him. If he was going to blank me, he’d have mumbled something lame. ‘What is this? Is that drugs? What do you take me for?’ Usual crap. He doesn’t. He just stares at the packet. If he were a dog, he’d be dribbling.

I count to seven.

Let my words sink in.

Let him remember the sweet bite of the powder as it rots his septum.

Now, ladies and gentlemen, for the closer.

‘And,’ I say, with a hint of smile that I know exudes trust, ‘it’s completely free.’

He looks around again. This is the riskiest part. If someone comes in, then there’s a connection made between him and me.

His eyes ask the question. What price?

‘Pass me on this course.’

‘Look,’ I say, ‘I’ll walk out of here right now, leave the packet on the table. Then you can decide what you want to do.’

His eyes contract and I see the fear.

‘You’re worried I’m wired or this is being filmed. Am I right?’

He now wants to speak but doesn’t know where to start.

I do the talking for him. ‘Okay, let’s alleviate that fear, Simon. I’ll stick this packet in the drawer here.’ I point to the table. ‘That’ll keep your fingerprints off it, and you can come back when, and if, you feel good and ready. Can’t say fairer?’

I’m a face reader. In my job you need to be. Micro gestures and all that. He’s emitting signals that tell me he’s still a few yards from crossing that finishing line and I need to up the ante.

He breaks the finishing tape with a small movement. A nod.

Research told me it was a shoo-in.

I push the packet to the back of the drawer, hiding it behind some loose papers.

Simon gathers his shit and scuttles from the lecture theatre.

Three days later, I’m sitting in a small café. The menu’s in Spanish. The sun on my shoulders is warm and Simon is dead.

It had taken a while for the news to reach me back in the UK. I’m not one for surfing the web – that leaves a trail. I don’t buy newspapers – some of the shops that sell papers have cameras. I don’t possess a TV – the licence requires too much ID. My medium of choice is the radio. But I only tune in occasionally, and if the news had reported Simon’s passing, it was when I wasn’t listening.

The confirmation of his demise came courtesy of reliable old school spy-craft. An envelope secreted in a copy of Railway Model Today, hidden in one of the many bins that litter the local park. My bin. The pre-agreed signal that the package was waiting to be picked up came in the shape of a copy of The Times shoved through my letterbox. Subtle and effective. And, like a jakie on the scrounge, I’d sifted through the bags of dogshit and Coke cans in the bin, lifted the magazine and removed the envelope that nestled in its pages. Three thousand pounds lay inside. I didn’t count it. No need. I’d placed the envelope in my Ryanair regulation-sized backpack and booked a flight, hotel and transfer on the pay-as-you-go phone that was switched off before I boarded the plane. Once in Spain I’d discarded the phone. SIM cracked in half. Memory wiped. Shell crushed.

The payment meant Simon was dead.

Research told me that Simon was cursed with two things: a hypersensitivity to peanuts and an addiction to cocaine.

Peanut powder mixed in with the coke.

He’d snorted, got high, too high to reach his EpiPen and his heart had stopped.

I’m due to return home tomorrow. There’s a melancholy in that thought. But needs must.

A small boy in a Lionel Messi Barcelona top zips up to me on a skateboard. He flips an envelope onto my table. I ignore it until I’ve downed my beer. Then I pocket it, get up, enter the café’s toilet. Open the envelope. Look at the picture. Look at the number written in Sharpie beneath it.

The woman in the picture lives less than five miles from where I’m standing.

I’ll be staying in Spain for a little longer.