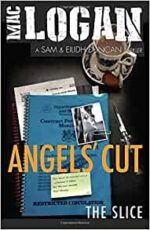 Maisie, in a powder-blue cashmere sweater, watched his snout twitch. The beginnings of a sneeze made his nostrils flare and flutter, like a rat sniffing at a tasty morsel of cheese.

‘I’m here, darling.’ Despite the coming explosion, he admired her firm cleavage, envying the sapphire pendant bobbing in its softness.

‘Ahh … Ahh … Ahh …’ She lunged and gripped his inflamed strawberry snout, rubbing, tweaking, suffocating the snort and blotting the gore on a tissue. Tears squirted from his eyes. ‘Ouch!’

‘And I’m awake again.’ His pout reminded her of Donald Trump.

He sucked water from an offered straw. Next, she mopped a red smear from his face with a wet-wipe and stroked his cheek. ‘Sorry I woke you, poppet. You were telling me about Carstairs before you dropped off.’

‘Oh him.’ Two red-rimmed rheumy eyes, tinged with jaundice, glared upwards. ‘Ripped off his partners for hundreds of thousands …’

‘I never liked him. Anyway, I sorted him out in the end.’

‘You certainly made sure.’

‘The quality of hired help can be problematic. Some killers don’t know when to abort.’

‘Trains on level crossings add a measure of finality.’ His weak snigger started another nosebleed.

‘Sorry, darling, I must keep you clean.’ She threw a stained paper towel into the waste bin.

He puffed out a sigh. The last squirt of air extruded two red, snotty bubbles. She pinched the gore away and he wailed. A carmine stain darkened his chin, soon removed.

‘What are you doing now, Maisie?’

‘Rolling up some cotton wool to stop the bleeding.’

She smeared medicated ointment on to a conical, hairy point and pressed it into the opening. Eyes watering, he groaned. The stuffing of his other nostril caused a near-shriek. A meaty hand swatted at delicate fingers and missed. His thickened voice blared, ‘For God’s sake, woman, are you trying to kill me?’

‘I’m glad I’m not bleeding from my arse.’

‘And, Carstairs died.’ She stood and smoothed her Ramsay Ancient Blue, tartan skirt. He adored the firmness of her buttocks as she turned and topped up his water. When she bent forward he recalled exciting lust-filled evenings.

‘Smashed to smithereens.’ The gleeful hardness in his voice echoed his power at its peak; not so long ago.

She nodded. ‘Only business …’

He giggled, ‘I love The Godfather, fantastic movie.’ He wheezed an in-breath. ‘Proper, philosophical storytelling.’

‘We achieved so much.’

‘Poor thing, he was sweet. But then, the Smith brothers sent their button-men.’

‘Pity they got Tarquin. A few minutes earlier and it’d have been me.’

‘Innocents die that villains may live.’

‘I learned a lot about the world you and Tarquin inhabited. Still, here you are.’

‘You’re generous.’ He leaned back and panted. She caught the blood-streaked vomit with a wide-brimmed disposable paper bowl.

Maisie locked his bulging bloodshot orbs with her crystal-clear, sky blue eyes. ‘All done?’ He nodded. ‘I forgave you for Tarquin and Sheldon and even for having Alphonse strangled.’

‘I thought he was having an affair with you.’

‘My, jealousy. I’m honoured you fancied me so much.’ The tip of her pink tongue fluttered on ruby lips. His brain reacted with a lust. His body lay unresponsive.

Her phone pinged, she read a text message, glanced at him and smiled.

‘Have it away with Alphonse?’

‘Fat chance! He had clammy hands and stank of cigars and garlic.’

‘I didn’t like him, apart from his hairdressing skills. What a talent.’

‘An honest mistake, then.’

‘People make them, dearest… Any regrets?’

‘One or two.’ Pasty fingers quivered as they touched his lips. ‘One or two…’

‘The doctor says your time is short.’

Brian grunted, clutched his lower abdomen and said, through grinding teeth, ‘God, Maisie.’ His breath hissed and stuttered. ‘It gets worse all the time.’

‘And no more medication just yet.’

‘I thought I was on palliative doses.’

‘Alas, the doctor says no, darling.’ Let’s talk and take your mind off it.’

‘Let’s stick with Carstairs, how do you feel now?’

A teensy-weensy miscalculation.’ He laid his head back, body shuddering, a new greyness tinting his moist, almost translucent, skin. ‘It’s the breaks, it had to happen quickly, so I pushed the button. I didn’t mean for them all to die.’

‘Some mistake: wife and three children as well as Carstairs.’

‘Seeing is believing.’ Her voice quietened. ‘… Nothing left of the car. Mum and dad splattered up the track, mangled in twisted wreckage and broken glass, leaving three little crumpled bodies on the crossing. The baby, six months old.’

‘You were upset, but you said you’d forgiven me.’

‘You were always there. And sorted out the collateral damage too.’

‘His brother, a rather nasty piece of work.’

‘I’m not sure I could have done that, you’re so able. Loyal.’ He closed his eyes. ‘What a fabulous investment though, killing them opened so many doors.’

‘Right place, right time,’ she smiled, ‘millions, and our amazing high life on the back of it.’

He laughed. He gurgled. His face turned deep puce and he vomited so fast she couldn’t catch it, more red-streaked greenish-brown puke erupted. He calmed as she cleaned him up, yellow gloved hands mopping paper towels over plastic sheeting. Next, antiseptic sprays and more wiping. He gazed ahead, thoughtful. ‘Our sex was wild after killings, Maisie.’

‘The best orgasms I ever had.’ She chucked reeking cloths into a grey bin.

‘And you’re only fifty-two.’

The medical equipment beeped away, displaying bright-coloured facts as IV fluid medicated a vein. He lay back and smiled. ‘You’re some lover, Maisie, wow, your energy, your passion. Even lying here, it’s a wonderful memory.’

‘With you nursing me,’ he sighed, ‘caring for me, right to the end.’ A sudden smile turned his haggard face into a grinning death’s-head. ‘My, when you played the nurse, with the lingerie. Oh, God!’

‘How energetic we were, such fun.’ Her bright smile dazzled.

‘Maisie, I have a confession to make.’ He gagged and blurted out a gurgling cough as vile fluids swamped the nose-plugs and dribbled down. She wiped up the mess, moved him forward, plumped up his pillows and rested him back down.

‘We started an affair a couple of years ago.’

‘You know?’ He retched again and bubbled gunge. She cleared his airways and helped him lie back. Exhaustion and weakness held him tight.

‘Stella told me in the spring. She saw the pair of you on your dirty weekend in Winchester last April. You know, when you went down there on business.’

‘Fell in front of a train.’

Maisie smiled. ‘Yes, may she rest in pieces.’

‘She was nothing compared to you.’

‘Boys will be boys and, as usual, you forgive me.’