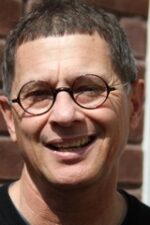 “The ghost of a murdered woman wakes me up every night. She whispers painful secrets, hidden years ago. She plans to tell me who killed her.”

The wiry man with the befuddled expression hadn’t looked at his doctor while speaking. He sat with erect military posture on the examination room table, gaping at a framed print that hung on an otherwise barren wall. The print depicted a dense forest of towering redwood trees. The redwoods stood like sentries guarding forbidden territory. A solitary figure faced the forest, his back to artist and the viewer. The figure seemed small, even insignificant, compared to the massive redwood trees.

“Did this ghost start visiting after we switched your medication, Mr. MacNealey?” the doctor asked.

“Waking up scares me now,” a perplexed fifty-six-year-old “Mack” MacNealey continued. “Life seems so much more hopeful when I’m asleep. But who will hear the rest of this poor woman’s story if she doesn’t wake me up and tell me? I’m her only chance.”

Dr. Wade Winthorpe stepped out of the dull exam room and signaled a young woman, his patient’s adult daughter and caregiver. Winthorpe doubted Emily MacNealey possessed the strength to handle what lay ahead. She’d already lost her mother.

“I want to keep him on the new medication,” he told Emily. “But call and tell me how it goes.”

Emily’s face revealed she’d anticipated as much. The newest prescription soothed her father’s condition a bit, and Dr. Winthorpe had already cautioned that the elder MacNealey’s … mental clarity … would degenerate with or without the new meds.

“A murdered ghost.” Emily’s voice trembled. “He told me last night. How much longer until he…” she couldn’t finish. The teardrops she’d fought to hold tumbled down her face.

The doctor shook his head. “I don’t know how much longer. Anything could happen.”

Before driving back to their home, Emily treated her father to pie and coffee at his favorite diner, just as he’d taken her there for pie and milk as a child. Inside the diner, the air was alive with the aroma of hamburgers sizzling on the grill and the sound of plates clattering in the kitchen. Mack MacNealey smiled but didn’t speak. By his tranquility, Emily could tell her father enjoyed the memories he rediscovered here.

Afterward, as Emily drove the lonely roads to the old but comfortable house she and her father shared again, a single dazzling star peeked from behind drifting clouds, as if hiding from the world’s misfortunes below. Emily’s father stared through the windshield, without turning his head, without blinking his eyes. He finally looked toward Emily.

“Do you believe in ghosts?” he asked. “Lost souls?”

Disheartenment crept across Emily’s face. But she drove on, thinking again about her decision to return to her childhood home, to care for her father and allow him the dignity of staying in his own house as long as his disease permitted. How could she have done anything else?

Another quarter mile down the desolate road Emily’s father pleaded with her to stop the car. She guided it onto the dirt shoulder beside a hay field. The car’s headlights lit the nearest edge of the field; a sliver of moon hung above like an empty meat hook in the black sky. The moment Emily stopped the car a moaning wind shrouded the field in swirling dust.

“Nothing’s wrong, honey. Let’s just wait a minute.” MacNealey pointed toward the hay field, his face blank, his eyes fixed in another unblinking stare. “That field is where it happened. Her murder. Do you know how long she’s waited? Waited for someone to hear her story? I’m her last hope.”

“So many years. Waiting. And now she’s here again. Her soul has returned.”

“Drive us home, honey. I’ll sleep so she can visit and tell me more.”

The next morning, Emily called her father’s doctor.

“Please help him, Dr. Winthorpe,” she begged. “He’s describing such awful things, about this ghost, about this woman’s murder. It’s so gruesome and frightening and I can’t stop him. For the love of God, help him, help my father, please.”

The quivering in Emily’s hands spread through her body until she could barely stand, let alone hold onto the phone.

“He’s even named the ghost now.” Emily heard her voice shake. “He calls her Cam-lee. Murdered thirty years ago, he says, in the most terrifying, bloody killing you can imagine. He tells me every detail. I just can’t—”

“I’m going to prescribe some mild sedatives for him. And something for you as well. That should help.” Winthorpe ended the call with Emily and made another. “Hello, Deputy Keenan. It’s Dr. Winthorpe.”

“I’ve told you everything,” Emily said to him. She worried she sounded nervous. “My father isn’t well, but he’s harmless. His condition and medication sometimes cause him to imagine things. I’m sure that’s all it is. I was on my way to the pharmacy when you called. He’s a wonderful man who just needs a new prescription. That’s all it is.”

Keenen turned his attention to a notebook on his desk. Emily glanced around the Deputy’s cramped office. A few books about law and police procedure lay on a nearby credenza. The walls and bookcases teemed with plaques, news clippings, and trophies celebrating Keenen’s long-past youth as a local school athlete. Emily saw no family photos anywhere.

Keenen broke the silence. “Cam-lee Trahn, a nineteen-year-old Vietnamese refugee, was brutally murdered in a hay field thirty years ago this week. July 8, 1972. She crawled out of the field and bled to death on the side of road. Your father had just returned from combat in Vietnam after . . . recuperating  . . . on a hospital ship. You were born a year later.”

“What does any of that—”

“We never proved who killed Cam-lee Trahn, never made an arrest. Her murder was my first investigation as a young deputy. Dr. Winthorpe was the acting County Coroner, just out of medical school, and examined the body.”

Keenen scanned the notebook again and continued. “Your father told you this ghost said the night she was killed she wore a silver locket with a photo of her grandmother inside, and the killer used a knife with a long, jagged blade.”

Emily shrugged. “He told me lots of things. Perhaps something stuck in his mind from the news back then.”

“The news didn’t report the locket or the serrated knife wounds,” Keenan said. “We never released those two pieces of information, held them back.”

“You’re saying you actually believe a ghost is talking to my father?”

“I’m saying your father somehow knows details of the murder that only the killer would know.”

Emily felt lightheaded. She clutched her hands together and her fingernails dug into the soft tissue between her knuckles.

Keenen gave her a yellow grin. “What? You think I believe in ghosts?” he asked. “Do you?”

Ten minutes after Emily left, Deputy Keenen was ready. During his phone call with Winthorpe, he’d requested the doctor ensure the pharmacy delay Emily, make her wait for her prescription order. Keenen needed to see Mack MacNealey alone. Find out everything he knew.

The deputy strapped on his service revolver. He rubbed his temples and his fingers glided over the crisscross scar above his left eye. The bright white scar tissue stood out like a starburst against his ruddy skin. Whenever people asked him about it, he blamed a fight from long ago. A fight he’d won, he always emphasized.

Emily called her father from the pharmacy. “Papa, I’m still at the drugstore. The prescription order is taking longer than I thought. I’ll come home as soon as I can.”

“I’m so glad you called. I was napping and Cam-lee woke me, warned me. The man who murdered her was a young deputy, a cop.”

“She tried to stop him, fought him in the field where we stopped last night. She even hit him in the eye with a rock that cut his forehead open. But he killed her. And Cam-lee says we’re in danger now, from this same man.”

Mack MacNealey hadn’t forgotten how to use the pistol he’d smuggled home from Vietnam. He kept it clean and oiled. The ammo was old but good. His war memories would never fade.

He recalled the night he’d ambushed an enemy scout, a young Vietcong guerilla. He didn’t dare risk the sound of a gunshot, so had used his combat knife. He remembered how warm the blood felt on his hands. The killing haunted him.

The former jungle fighter placed his now loaded pistol on a scarred wooden end table. He stood in the center of his home’s living room and lifted a frayed leather cord high above his head. A ceremonial gift from a Vietnamese tribal chief. After so many years, the severed human ears and fingers that hung from the cord looked like withered leaves and twigs.

“Protect me and make me strong,” MacNealey chanted as he shook the leather cord and jangled the grisly souvenirs cut from bodies of the dead. He slipped the leather cord around his neck and sat on the floor, behind his beloved armchair, beneath a window. Waiting. Holding the pistol. Watching for shadows.

Keenen knocked on MacNealey’s front door and then let his hand drop toward his holstered revolver. He didn’t see a car, so figured Emily hadn’t returned from the pharmacy yet. And that meant her father was here alone. Keenen knocked again, louder. Still no answer. He paused and listened. No sounds at all from inside the house.

He crept to a nearby window and tried to peer through, but the window shades were pulled shut. He checked another window. A better view, but not by much. Nobody visible. No movement anywhere.

What the hell is going on? Where is he? Keenen wondered. He drew his revolver from its holster and held it at the side of his leg, pointed downward. He found another window, around the side of the house, in the sunlight. The window shades were wide open. He leaned in and pushed his face close to the glass. His shadow spilled inside.

The man he sought saw the shadow and sprang up on the other side of the window, inches from Keenen’s face. Each man saw the other’s gun. Both men stepped back and fired in rapid three-shot patterns that shattered the window glass before ripping into their targets. Both men fell dead.

A week later, nearly half the town attended Deputy Keenen’s funeral. The County Commissioner spoke. The County Council decreed it an official day of mourning. The local newspaper sent a reporter. A nearby TV station dispatched a camera crew.

And a day later, Emily alone attended her father’s burial.

She gazed at his casket and wept. “I believe in ghosts now, Papa,” she sobbed. “I do. What else would explain everything you knew about that poor woman’s murder?”