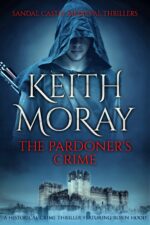 ‘From Hell, Hull and Halifax, Good Lord, deliver us!’

My old father used to recite that to me. ‘Hell, because there be’nt no redemption from there, Hull because of that fast-flowing river that drowns so many, and Halifax because they’ll cut your head off for thirteen pence.’

The old man must have suspected that I would lose my head one day. And all because that verger’s juicy wife said that two shillings was the price to lie with her.

Two shillings! The reddleman I robbed had only thirteen pence on him, so I had to try for another coach on the Halifax road. But they were waiting for me, the vermin! The magistrate laughed when he said they were going to crop my Adam’s apple.

I was not a happy villain in that stinking cell with its rotting straw and pestilential rats. And then they sent that sanctimonious priest to harvest my soul before the morrow.

‘I can absolve your soul if you repent.’

‘In that case I won’t be troubling you, priest. I’ve already made a rare bargain with Old Nick. Look,’ says I, showing him the birthmark on my bum, ‘he sealed the deal with his kiss. When they lop off my head he gets my soul and also the souls of the last five men that I talk to.’ I grinned at him as I lay back on the straw. ‘Now my lips are sealed forever.’

A superstitious rogue, that priest. Just like the turn-key, his two lads and that wolfshead of a magistrate. And so here I am at six o’clock on my beheading day, with a flask of beer and three shillings in my purse, on my way to Hull. Neither Hell nor Halifax want me yet.

I wonder if that verger’s wife would settle for a shilling?

This piece of flash fiction story won author Keith Moray the Fish One Page History Story prize a few years back, and its success led to him writing The Pardoner’s Crime, the first of four novels in the Sandal Castle Medieval Thrillers, now published by Sapere Books. To find out more, visit: https://thecra.co.uk/find-an-author/moray-keith/