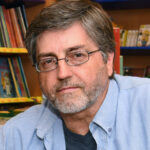 From local journalism, Douglas moved into True Crime, then history and now concentrates on crime fiction.

His current series features Rebecca Connolly, a reporter based in Inverness, and the plotlines often mix history, myth and legend with modern day crime.

He worked with the Scottish Faculty of Advocates and other groups to create a drama to show how a real-life case is tried. Presented in a real courtroom with lawyers, court staff and a judge taking on roles and a jury drawn from the audience, tt played to sell-out audiences during the Bloody Scotland weekend in 2019.

He is often asked to comment on crime in TV documentaries.

Along with crime writers Neil Broadfoot, Gordon Brown and Mark Leggat, he appears in the Four Blokes in Search of a Plot show which sees them writing a story live on stage or on screen with plot prompts from the audience.

In addition, he presented a series of podcasts during 2020 with bestselling author Denzil Meyrick.

He lives in south west Scotland with a dog and cat who thinks he’s a dog.