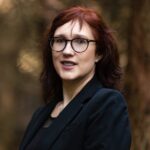 Sam Blake has been writing fiction since her husband set sail across the Atlantic for eight weeks, and she had an idea for a book. She is the Chair of the CWA Irish Chapter.

Sam is originally from St. Albans in Hertfordshire but has lived in Ireland, at the foot of the Wicklow mountains, for more years that she lived in the UK. Her debut novel ‘Little Bones’ (Bonnier 2016) was No 1 in Ireland for four weeks, remained in the top 10 for another four, and was shortlisted for Irish Crime Novel of the Year. It launched the bestselling Cat Connolly trilogy.

Moving away from police procedurals Sam is keeping a focus on strong female characters, writing psychological thrillers for Corvus Books. ‘Keep Your Eyes On Me’ went straight to No 1 in January 2020 and ‘The Dark Room’ is due in January 2021. Sam has already signed for two more thrillers with Corvus Atlantic that will keep her busy until 2023.

Sam has two teenagers, three cats and lives in a 200-year-old cottage with an occasional poltergeist who moves things at the most inconvenient moments. Her husband was a member of An Garda Siochana, the Irish police force, until his retirement.

Sam Blake is a pseudonym for Vanessa Fox O’Loughlin, the founder of The Inkwell Group publishing consultancy and the award winning national writing resources website Writing.ie. She is Ireland’s leading literary scout who has assisted many award winning and bestselling authors to publication. Vanessa has been writing fiction since her husband set sail across the Atlantic for eight weeks and she had an idea for a book.

Vanessa is a board member of the Society of Authors and is currently running a live Facebook series on Friday’s at 12 noon with literary agent Simon Trewin – Winning Writing Game: From Big Idea to Bestseller. All the videos are recorded and available to view at https://www.facebook.com/writing.ie/

As Sam Blake, she is the founder of the Murder ONE International Crime Writing Festival – Ireland’s first designated crime festival, which first took place in Dublin UNESCO City of Literature, in November 2018.

After writing three bestselling police procedurals in the Cat Connolly series, Sam Blake has switched to standalones and is now published by Corvus – Keep Your Eyes On Me went straight to No 1 in Ireland on release in January 2020 (Strangers on a Train meets Dial M For Murder; ‘The conceit is straightforward but the execution deliciously complex. Vittoria and Lily are wonderful creations that we enjoy following through the twists and turns of the plot of this beautifully constructed thriller.‘ Amazon reviewer.) The Dark Room is due out in January 2021.