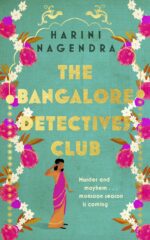 Writing about Food in Fiction

I love mysteries that talk of food. Some of my favourite series include the Inspector Chen Cao series by Qiu Xiaolong, which brings Chinese everyday cuisine to life, Mia P Manansala’s Tita Rosie’s Kitchen Mysteries, which showcases Filipino American cuisine, and Georges Simenon’s classic Inspector Maigret series, whose descriptions of poule-au-pot and lamb stew are incredibly appetizing, even for a vegetarian like myself.

My debut fiction book, The Bangalore Detectives Club, is set in 1921 colonial Bangalore. As with many traditional cultures, family gatherings and social events in India are centered around food. Cooking in the 1920s was a heavily labour intensive process, done mainly by women (of course). I love documenting the traditional recipes in my family, and preparing them on festival days. But I’m also troubled by the gender bias and inequity at the heart of it. So when I set out to write a historical crime novel, it was clear that food would play a big role!

Nineteen-year-old Kaveri, my book’s heroine, is a new bride who moves to Bangalore to live with her doctor husband, Ramu. As typical of those times, they had an arranged marriage, and are just getting to know each other – when a murder intrudes on their lives. Kaveri is fiercely independent, loves mathematics, enjoys swimming (in a sari!) and drives a car. But she is also a young woman in love, who wants to learn how to cook to feed her husband. Food was a useful plot element that helped me bring in multiple threads, though I had to be careful not to overdo it.

Gossiping in the kitchen

Kaveri’s experiments in the kitchen helped me demonstrate the increasing closeness between her and Ramu. She loves cooking for him, and he reciprocates, making the morning coffee, cooking for her on weekends, and cleaning the dishes. This may seem unusual for those times, but many older men in my family were excellent cooks – I learnt how to cook from my father, who was born in 1930. Food also places Kaveri in the company of women like her gossipy neighbour Uma aunty. As they cook, they talk about people they know, providing vital information on the domestic lives of key suspects. And finally, through discussions of what is madi – ritually pure food – I could depict prevailing caste and class prejudices which Kaveri abhors and deliberately violates.

Food is culture, and culture makes history come alive. I grew up on a childhood diet of Enid Blyton mysteries, and later in my teens, discovered Golden Age British historicals. These books left me salivating over their descriptions of high tea. I couldn’t find any clotted cream, but the books goaded me into finding a recipe to make scones from scratch. I ate and enjoyed my scones, all the while wondering if they resembled the real deal. The Bangalore Detectives Club concludes with authentic local recipes for a complete Indian meal. They’re quick and easy to make, so no one needs to spend hours slaving in the kitchen. As with my introduction to scones, I hope the book brings South Indian cuisine to a wider audience. I look forward to hearing from readers who try them out.

A reviewer recently commented that the recipes for spiced dishes I provide at the end of the book are a refreshing difference from the dessert recipes normally seen in culinary cosies. I read it and laughed, remembering my obsession with scones!

Here is a bonus savoury recipe for readers – fried onion fritters, delicious with a cup of afternoon tea.

Take two large onions and slice them thinly into rounds. Place in a large bowl, along with two tablespoons of chopped coriander leaves, one tablespoon of curry leaves, and a couple of finely chopped green chillies (omit or increase the chillies depending on your preference). Add a teaspoon of salt, mix well, and set aside for five minutes for the flavours to meld. Once you add the salt, the onions will release juices into the bowl. Do not drain this out.

In another bowl, take half a cup of chickpea flour, and add a teaspoon of cumin seeds, a teaspoon of paprika/red chilli powder, and a teaspoon of cumin powder. Finally, add a spoon or two of rice flour (you can use all-purpose flour if you don’t have rice flour). Mix well, and fold in the onion mix which has rested for five minutes, kneading lightly. The juice from the onion will bind to the flour, resulting in a thick, lumpy dough. If the dough feels watery to you, add some more of the gram flour to thicken it.

Take a couple of tablespoons of dough at a time in your clean, dried and greased hands and pat the dough into an approximately oval shape. Drop several ovals of dough into a pan of hot oil and fry them on a medium flame till they turn golden brown, taken them out with a slotted spoon and placing them on squares of paper to drain out the excess oil. These bajjis are soul food for damp and miserable rainy days. They are best consumed when freshly made, crisp and hot, alongside a strong cup of Indian tea. You can use the same approach to make potato fritters, or fritters with thick vine spinach leaves.

You can read more about Harini Nagendra and her delicious books here.