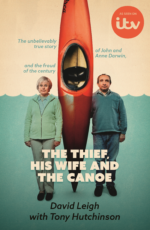 The Thief, His Wife and the Canoe by David Leigh

My book started its life in late 2007, the same month I had flown from Panama to Miami and on to Manchester, via Atlanta, Georgia, to bring Anne Darwin home to face the music. Anne was the wife of ‘Canoe Man’ John Darwin and the couple who had put the north-east seaside town of Seaton Carew on the map for all the wrong reasons were facing a bleak future.

As a journalist on assignment for the Daily Mail and Daily Mirror, I had played a key role in exposing the couple’s gobsmacking lies; cruelly fooling their family, friends, and loved ones, not to mention the police, banks and insurance companies, into believing that John had died in a tragic canoeing accident in the North Sea nearly six years earlier.

Turned out he’d barely got his feet wet and had spent most of his time living in a bedsit in the house adjoining his imposing sea-front home, flitting back and forth between the two properties via secret connecting passageways. His only disguise was a shaggy beard, hat, glasses and a walking stick for his faked limp. Brazen doesn’t even go there.

Eventually, after John was declared missing, presumed dead, Anne was able to collect on the insurance policies that enabled her to pay off the crippling debts that had prompted her husband to stage his death in the first place. They moved to Panama to start a secretive new life in the Central American sunshine.

But their rosy new life didn’t last long. A change in the country’s immigration laws meant John would no longer be able to live there using his fake identity. He flew back to the UK and walked into a London police station sporting a suspicious golden tan, saying he had amnesia and claiming to be a missing person.

But it wasn’t long before the couple’s cruel lies were exposed by an astonishing photograph of them posing happily together in Panama – eighteen months before John’s resurrection. Almost immediately, their fantasy lives came crashing down.

It was such an incredible story that I decided to write a book. But A Picture from Panama never saw the light of day. Everyone knew the story, I was told. Publishers wanted Anne’s story, so I ghost-wrote her book, Out of My Depth. My own manuscript sat, figuratively speaking, gathering dust.

Until one day in April 2020 when I received an email from a guy called Dave Nath, who ran an independent production company, Story Films. He wanted to make a drama on the canoe saga. But Anne had tired of the publicity and didn’t want to licence her book. He was stumped. I told him about my unpublished manuscript and his ears pricked up. I sent it to him and he loved it. He recruited celebrated script writer Chris Lang to write a pilot and took his idea to ITV. Head of drama Polly Hill quickly commissioned a four-part series.

I dusted down my book, brought it bang up to date and recruited the help of Tony Hutchinson, the now retired Cleveland Police detective superintendent who led the investigation into John Darwin’s miraculous resurrection. Then I asked ITV Publishing if they could find a publisher.

The amazing Shirley Patton sent it to a dozen publishers. We had several good offers – and Hodder & Stoughton acquired the rights to the newly named The Thief, His Wife and The Canoe. The drama of the same name will be shown on ITV over Easter 2022.

The moral is never give up: it took me 15 years!