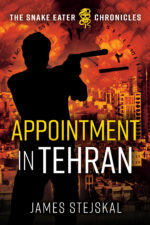 How I Came To Write ‘Appointment in Tehran’, by James Stejskal

We knew it was going to happen sometime soon. When exactly was a mystery. It was one of those closely guarded secrets that would only be revealed when it was successful or went spectacularly wrong.

The teams had been selected. We had trained hard but there was an issue; two missions were happening at the same time. One was an exercise, something long planned that couldn’t be changed for “OPSEC” reasons. Operational security was paramount. But no one wanted to play; it wasn’t the real thing.

The other mission was real — an actual, downrange operation that every Special Forces soldier hopes for — a replay of the Son Tay POW Rescue Raid — every man wanted to be a part of this one, no matter the risk. But nine were chosen, men not committed to the training mission, and they would be part of a larger element that included men from Delta Force and the Rangers.

The rest of us deployed to southern Germany for the big exercise. Operating under cover, individually in civilian clothing collecting intelligence on the “enemy” and helping other Special Forces teams complete their tasks.

Normally, it would have been a good operation. But my heart wasn’t in it. I badgered my cell leader with questions when I met him, often on a forest trail or a country road lay-by. Had he heard anything? Nothing, he responded. No word of the other mission. Waiting is often the worst sentence — when you know  something is happening but you aren’t part of it. So close…

I got up one morning. It was 25 April 1980, and I came down to the small breakfast nook of my pension deep in the Black Forest. On the table lay the local newspaper, its huge headline visible from across the room.

I heard someone say, “The Americans really screwed the pooch, eh?”

I didn’t tell him I was American. I just wanted to wring his neck.

I fell into a black funk. I’m pretty sure my comrades were in the same state, just wanting to get back to West Berlin to get the full story. Everything we read was guesses or conjecture; opinions of pundits and armchair generals. It was all depressing.

A week later, we were back in West Berlin. The story was told of how the force was reduced in size, helicopters failed and, with too few to continue, the mission cancelled.  The force was deep inside Iran when an accident occurred. Eight men were lost as the force evacuated.

We couldn’t discuss it with anyone outside the unit. After all, no one knew that an American Special Forces unit was stationed in Berlin.

For the rest of that we year, we trained for a re-match. The force was increased in size and firepower. Rescue and retribution, we thought. But then came the elections and political change in Washington. The mission was cancelled, the hostages released. America greeted them home with yellow ribbons. We were disappointed, but we had been ready. It’s what soldiers do.

But there was another story, even more secret, one that was very successful. American soldiers infiltrated Tehran under cover to prepare the way for the rescue. Brave Americans who volunteered for the job and did it well.

I held that tale inside me a long time. Once the Cold War was over, the unit disbanded and when my service was finished I wrote a history of the unit. The U.S. Government cleared it and my book Special Forces Berlin was published by Casemate in 2017.

Then I decided to share other stories. Tales with details subtly changed, events reframed — stories that came from incidents I experienced. The characters are versions of people I met along the way, some good, some not so. And thus The Snake Eater Chronicles were born.

In them I tell the stories of American Special Forces during the Cold War who dealt with Soviet  spies and the beginnings of terrorism in Europe. I like to take what really happened and ask, What if? It’s fiction but there is a fine line between it and the truth.

My first novel, A Question of Time, is set in the late 1970s. A Special Forces sergeant and his crack team of operators are tasked to extract the CIA’s most important asset from communist East Germany before he is captured by the organization he betrayed. A jaded Kim Becker must work with an unproven, but very talented operative, Sarah Rohan, to penetrate East Berlin to rescue this asset.

In my second novel the characters move in different directions. Becker moves up and a new face appears: Paul Stavros. He is the boyfriend of Sarah, so she’ll be around for a while (especially because she has enthusiastically taken to her new skills). There are and will be other characters (and I mean Characters) who show up from time to time — real-world problems do not call for a one-man band as James Bond movies would have you believe.

And my stories will also evolve as the world has changed. I may even catch up with present day. But first, I had to finish my tale of the Iran Rescue Mission and the very small but very secret story that took place within it.

It’s called Appointment in Tehran and the elevator pitch goes like this.

“With fifty Americans held hostage in Tehran, a frustrated American President green-lights an audacious rescue plan while the CIA and the KGB try to find a nuclear weapon hidden in Iran. What could go wrong?”

To read more about James, head over here.