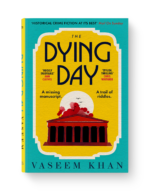 I can understand why.

The book, set in Bombay in 1950, begins with the disappearance of a 600-year-old copy of Dante’s The Divine Comedy from the city’s Asiatic Society. The case lands on the desk of India’s first female police detective, Persis Wadia, first introduced to us in Midnight at Malabar House (currently shortlisted for the CWA Sapere Books Historical Dagger). Persis – together with English forensic scientist Archie Blackfinch – soon uncovers a series of complex riddles written in verse. And then they discover the first body…

Crime novels appeal to readers on many levels – great characters, evocative settings, and, above all, the element of mystery. The best crime fiction challenges our intellectual vanity. Codes, ciphers, riddles, numerical puzzles, mysteriously cryptic musings left behind by the victim inked in their own blood. As a lifelong crime reader, I’ve always found such devices to be wonderfully engaging and I freely admit that The Dying Day was inspired by Dan Brown’s blockbusting series of novels featuring symbologist Robert Langdon.

The first in the series, The Da Vinci Code, employs all of these devices, beginning with the iconic opening scene, when the dying Jacques Saunière arranges himself on the floor of The Louvre as Da Vinci’s Vitruvian Man to point our hero in the right direction. Soon, anagrams appear that must be unravelled: O Draconian Devil! becomes… Well, I won’t give away the answer, obviously! And then there are the cryptic riddles that lead Langdon ever onwards. For instance: “In London lies a Pope interred; his labour’s fruit a Holy wrath incurred. You seek the orb that ought be on his tomb. It speaks of Rosy flesh and seeded womb.”

I use this particular device in The Dying Day as Persis hunts The Divine Comedy manuscript. Formulating riddles that make sense within the context of your plot, that are finely balanced so that the reasonably well-read reader might guess, if not all, then at least part of the answer, is no easy task. And then trying to get the lines of the riddle to rhyme…! There’s also a numerical code to be unravelled – think of the code in The Girl with the Dragon Tattoo – as well as a few other cryptic mechanisms to keep readers engaged. And that’s the point: we want to throw down the gauntlet to our readers, we want them participating in the hunt.

Of course, a crime novel is more than the sum of its parts. The Dying Day is a crime thriller, but it is also an exploration of a period in Indian history that is rarely depicted in fiction. India in 1950 – just a few years after Independence, Gandhi’s assassination, and the horrors of Partition – is a turbulent place as the country takes the reins after three hundred years of colonial rule. And yet, tens of thousands of foreigners remain in the country.

Indeed, it was that single fact that inspired this series.

In Midnight at Malabar House, a prominent British diplomat is murdered and the case lands in Persis’ lap. In The Dying Day, the English curator of Bombay’s Asiatic Society vanishes along with the Dante manuscript. These novels are my attempt to shine a light on the changing Anglo-Indian relationship post-Independence. That I’ve chosen to wrap that historical narrative around crime plots speaks to my love of the genre.

I’ll finish as I started. With a quote about The Dying Day, this time from Ann Cleeves. “This is a crime novel for everyone; for those who love traditional mysteries there are clues, codes and ciphers, but it also has a harder edge and a post-war darkness. Brilliant!”

If you choose to read it, do let me know how you get on with solving the puzzles!

Find out more about Vaseem Khan and his books here.